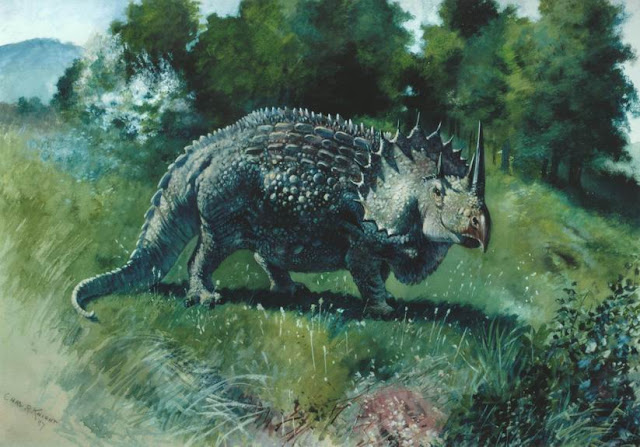 Today, most argue that Agathaumas is simply a mislabeled Triceratops.

Agathaumas is now displayed at the Field Museum in Chicago. It was given its name, which refers to its huge size, by paleontologist Edward Drinker Cope in 1872. It is a nomen dubium, however, and some debate exists to what Agathaumas is. Cope himself originally supposed it to be a type of hadrosaur until O. Marsh described Triceratops in 1889.

Artist Charles R. Knight painted the dinosaur for Cope, creating a fantastic-looking beast, which blended the lengthy facial horns of Triceratops with the spiked frill of the Styracosaurus Dinosaur.


The artwork was exposed years later by stop-motion animator Willis O'Brien, who used the Agathaumas in the 1925 film The Lost World. The Agathaumas has appeared in a variety of forms since then, and if those who doubt its existence are correct, it is one of the more successful imaginary dinosaurs.